SG Group is a bar culture company that operates several award-winning bars, based in Shanghai and Tokyo. Under the instruction of our founder Shingo Gokan, title-holding bartenders are dedicated to providing our guests with quality service.

Our bars are a place where people can come in, sit down, and enjoy in their own way. Whether that be rewarding yourself with a special cocktail, or casually enjoying a drink with a friend, we are committed to our core value of creating a space where everyone can “Sip & Guzzle”. 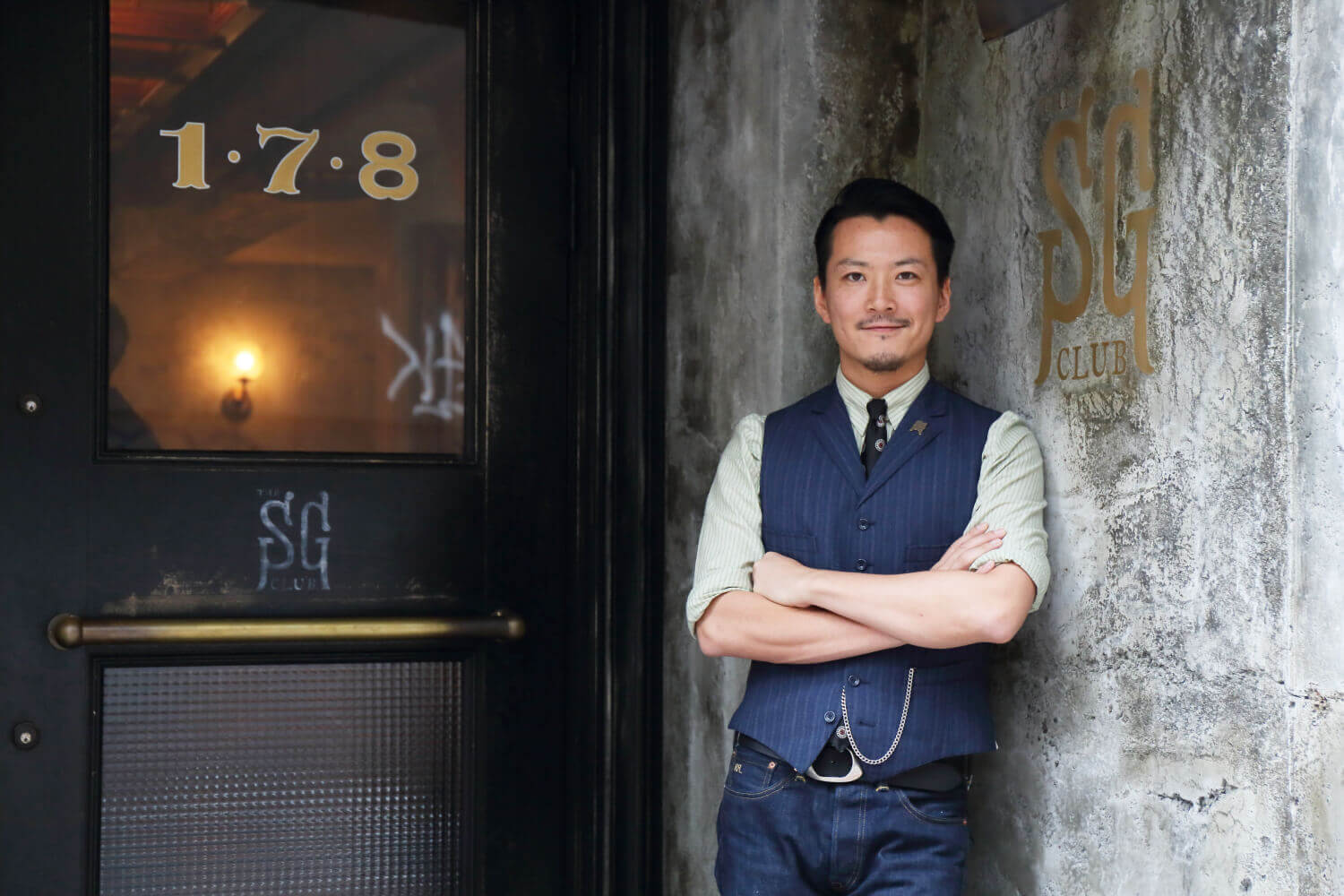 Founder and representative of SG Group, Shingo Gokan is recognized as one of the leading figures in the international bartending industry.

Starting with placing as global champion at the Bacardi Legacy Cocktail Competition in 2012, Gokan has earned numerous prestigious titles, including International Bartender of the Year at Tales of The Cocktail 2017, which has been described as the bar industry’s equivalent to the Oscars.

Bar World 100 has recognized Gokan as one of the industry’s most influential figures in 2021, placing him in the top 4 individuals in the world.

Escape into a Secret Utopia of Cocktails

Veiled among the elegant boulevards of Shanghai’s former French Concession district, a modern-day speakeasy awaits your visit. Taking inspiration from the US Prohibition Era, guests enter a hidden entrance located inside bar tool boutique “OCHO” seeking escape from the turbulence of the city.

With a vibrant and convivial atmosphere, the second-floor bar is a glistening spot of late-night lore. Enjoy the stimulating selection of cocktails created behind the glistening copper-top bar.

Indulge in the opulent ambiance of the third floor, where tradition and innovation coalesce. Savor the moment with time-honored classics and original recipes using carefully selected Japanese whiskey and exclusive craft spirits.

Comprised of Sober “Cafe”, Sober “Kitchen”, and Sober “Society”, Sober Company offers an all-day experience where guests are welcome to enjoy cocktails at any scene of the day.

Serving an eclectic array of drinks and dishes, each section embodies the element of a neighborhood in New York, offering guests a tour around West Village, China Town, and East Village of Manhattan. 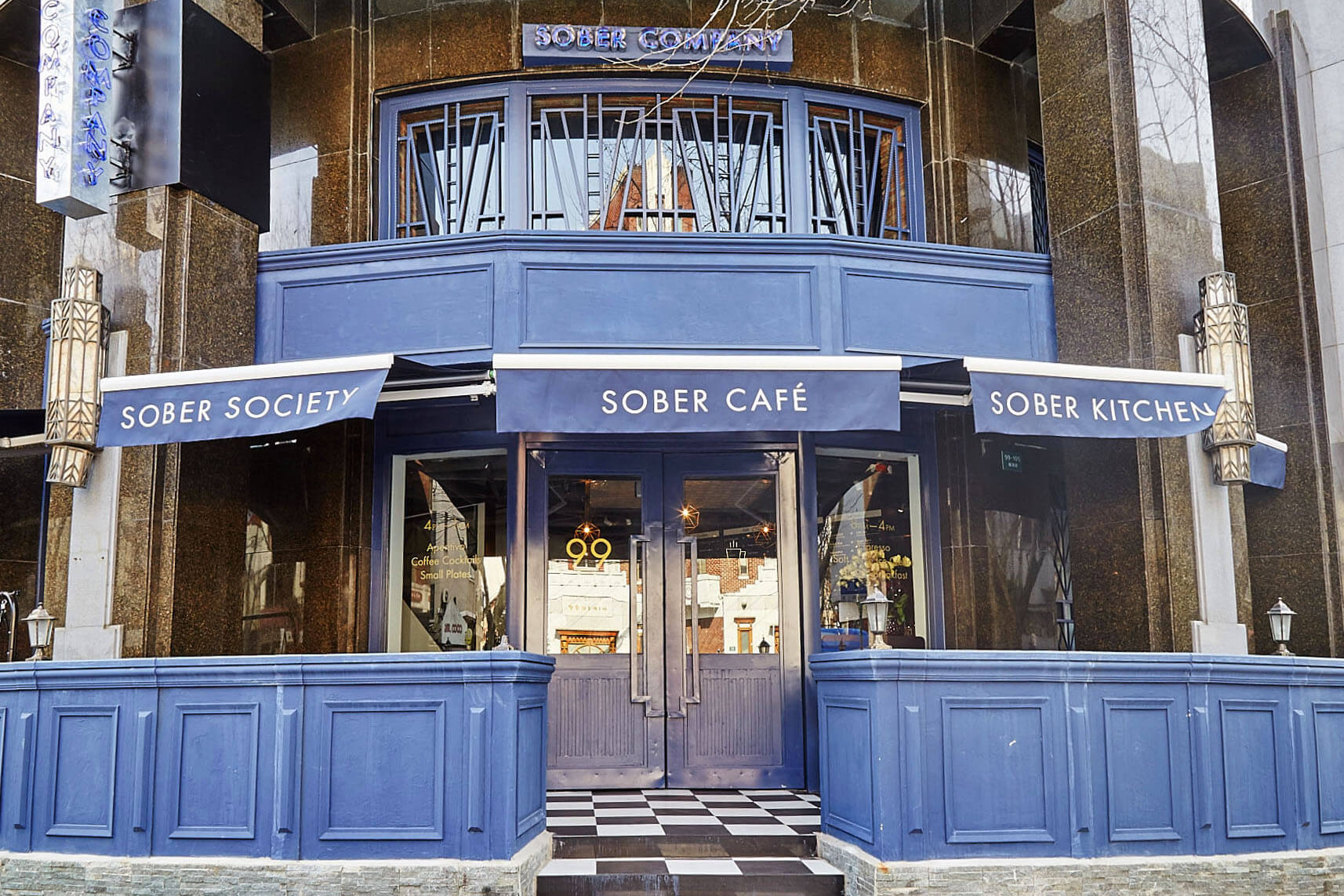 Start your excursion off with aperitifs of coffee and tea cocktails crafted by our baristas at Sober “Cafe”, and hop over to Sober “Kitchen” to enjoy quality modern Chinese cuisine with a side of cocktails. Finally, enjoy the afterglow of your multicultural experience with artisanal digestifs served at Sober “Society”. When it’s time to leave the venue, you will definitely be left tipsy.

A FINE PLACE TO SIP OR GUZZLE

Inspired by the first official journey made by the Japanese to the United States in 1860, The SG Club offers a unique blend of influences reminiscent of the era when cocktail culture was reaching its first golden age. Divided into two floors known as Sip and Guzzle, carefully crafted cocktails are curated to represent the contrasting drinking styles.

Guzzle, located on the ground floor, offers an upbeat and warm atmosphere with a vintage west coast feel. The cocktail list consists of approachable cocktails, as well as an abundant selection of mocktails and take away cocktails.

Downstairs awaits Sip, a basement haven hinting at an old New York gang club with samurai inspirations. Many cocktails here draw from the unique flavor combinations one finds at fine dining restaurants. A professional shoeshine is available as guests enjoy their cocktails. 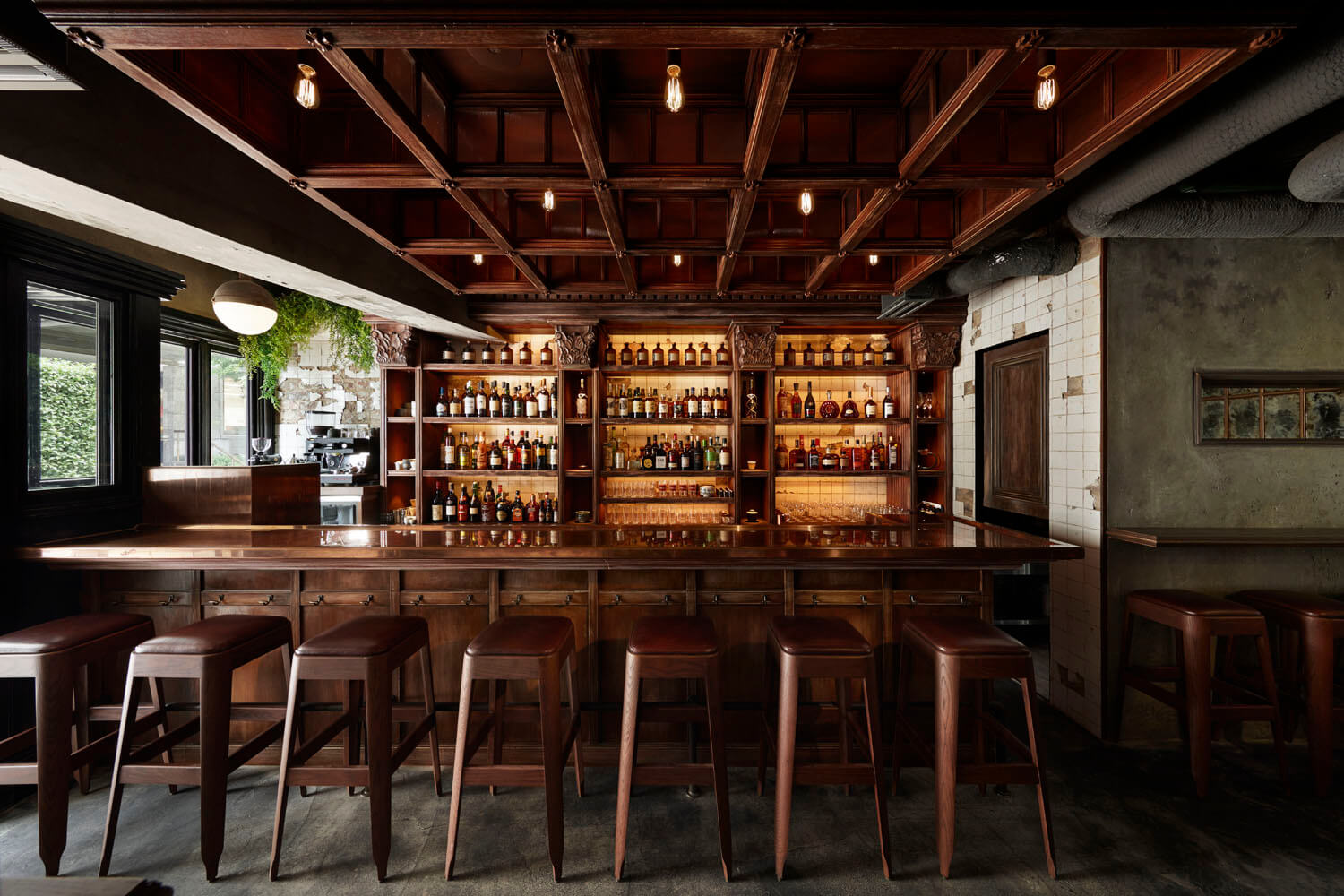 Tucked away on the second floor is Savor, a membership cigar and cocktail lounge founded on the blend of Cuban and Japanese sensibilities. Japanese details integrated masterfully with Caribbean aesthetics, guests enjoy cocktails tailored perfectly to each cigar. 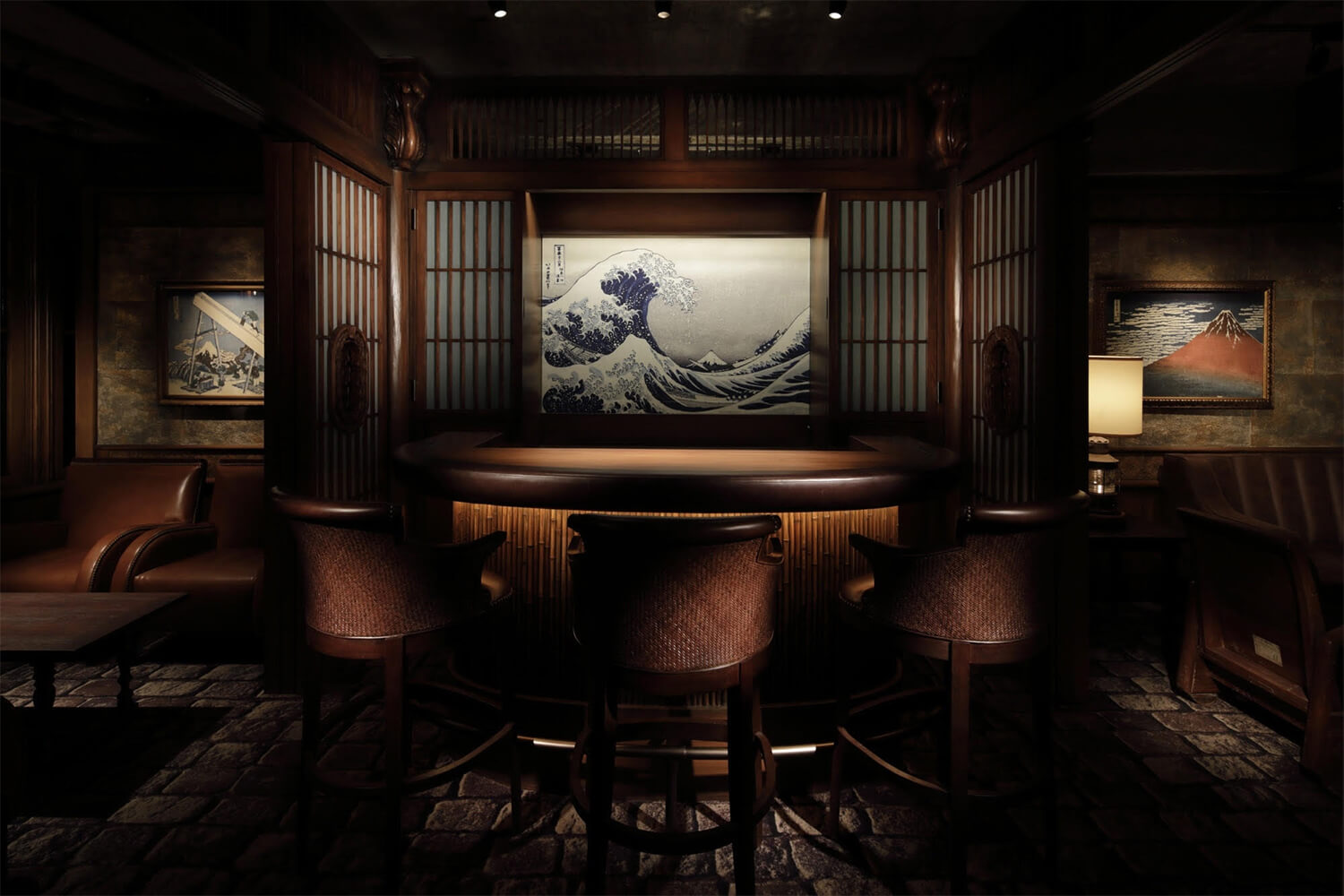 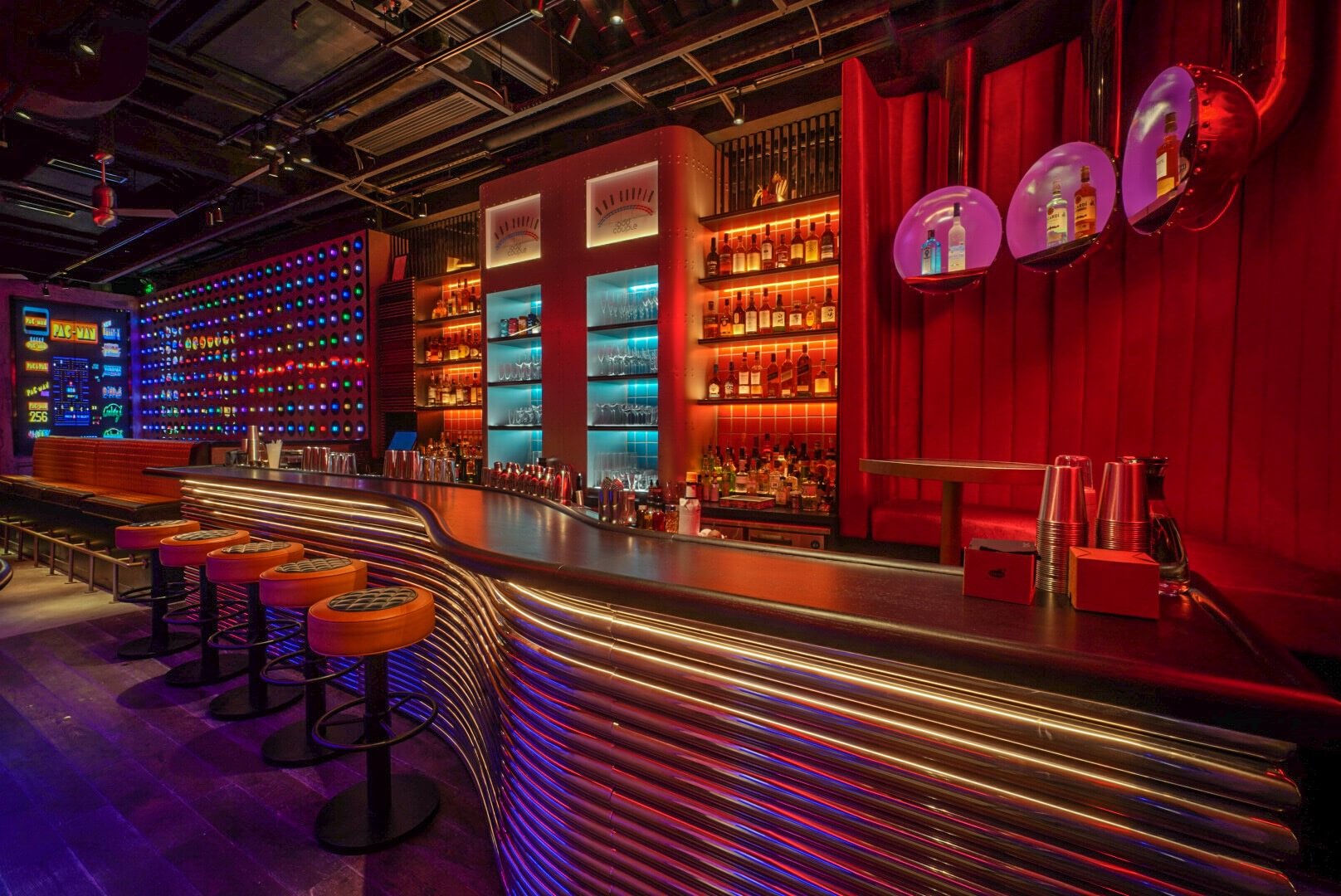 A Recreation of the Imagined Future in the 1980s

Produced by the dynamic duo providentially born both in 1983, this bar brings to life the image of a bar in the future envisioned in the 1980s. Amidst the explosion of fluorescent lights and infectious energy, enjoy the retro futuristic atmosphere with palatable cocktails designed by the two masterminds. 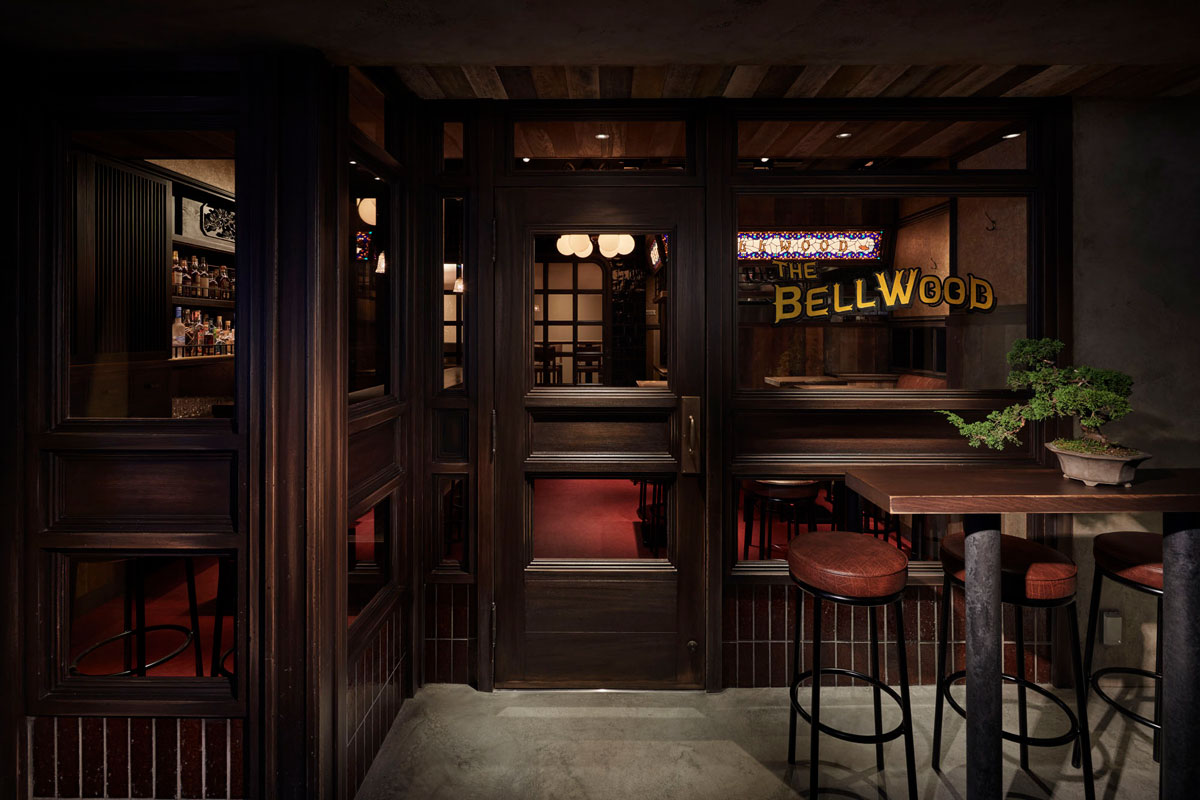 100 years ago, Taisho-era Japan experienced cultural synthesis and symbiosis of Western modernity and nostalgic Japanese tradition. As the two contrasting cultures seamlessly merged, a new found, rich middle ground of Japanese-Western eclectic style began to appear in the city of Tokyo. At the heart of the new cultural movement was the “kissa”, an old-school Japanese specialty cafe, where notable authors and artists rendezvoused to exchange ideas. The Bellwood encompasses the Taisho-era “kissa” culture in the form of a cocktail bar in present-day Shibuya.

The essence of refining tradition is reflected thoroughly in the sumptuous and elegant interior and rich menu. 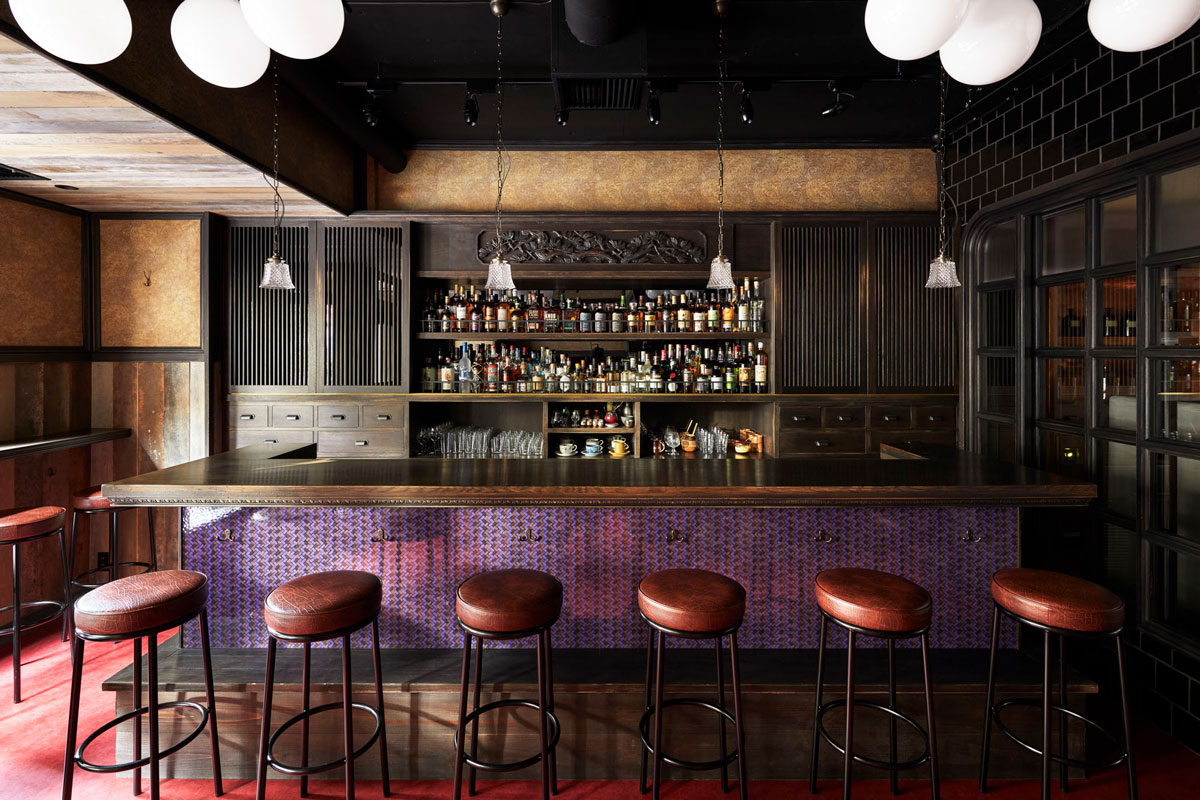 With an exquisite and romantic ambience inspired by Taisho-modern aesthetics, The Bellwood features a refined selection of drinks curated by Chivas Masters World Champion Atsushi Suzuki, and a food menu of “yōshoku”: Japanese fusion cuisine, with a modern twist. 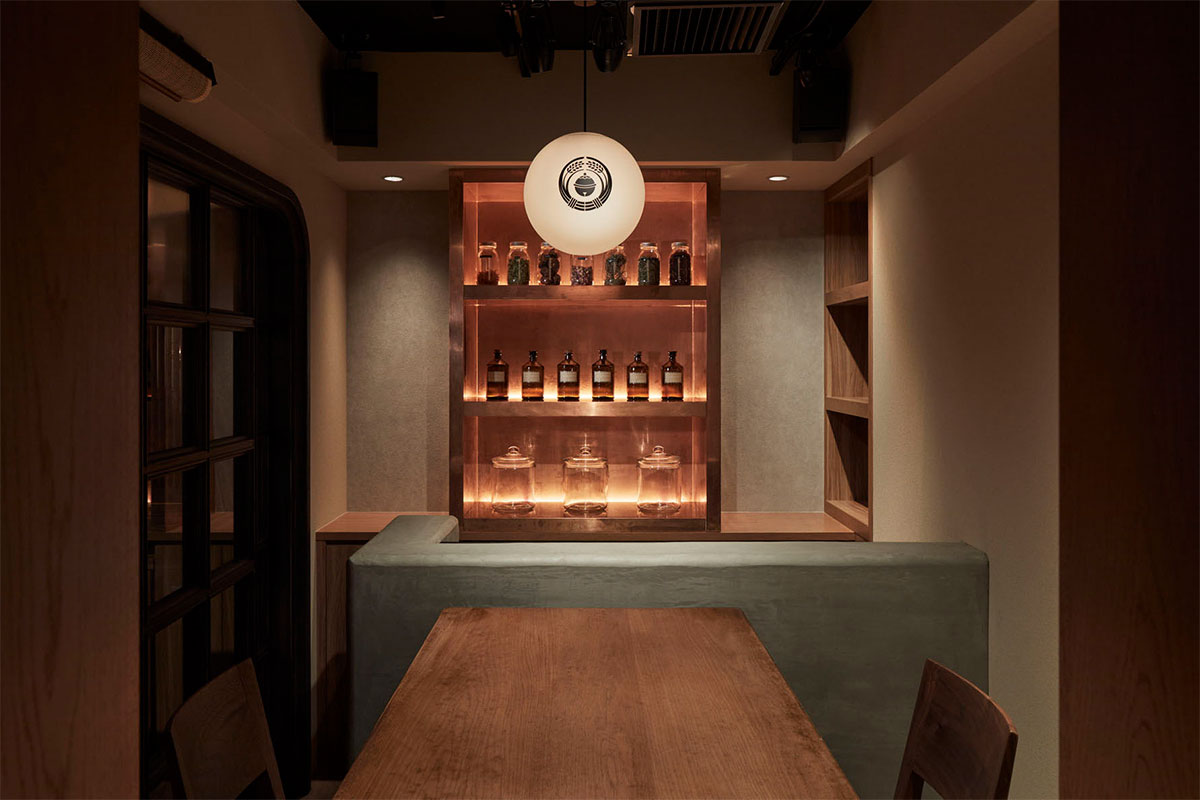 At the end of the main bar is a private room, offering guests an intimate and exclusive cocktail pairing experience.

Illustrious for innovative cocktail bars, the SG group challenges to amalgamate cocktail bars and the famous Japanese “Izakaya” that were once thought to be mutually exclusive. Taking inspiration from the street culture in New York’s Lower East Side and Tokyo’s Shibuya district, SG LOW offers a playful interpretation of the traditional casual bar-restaurants. 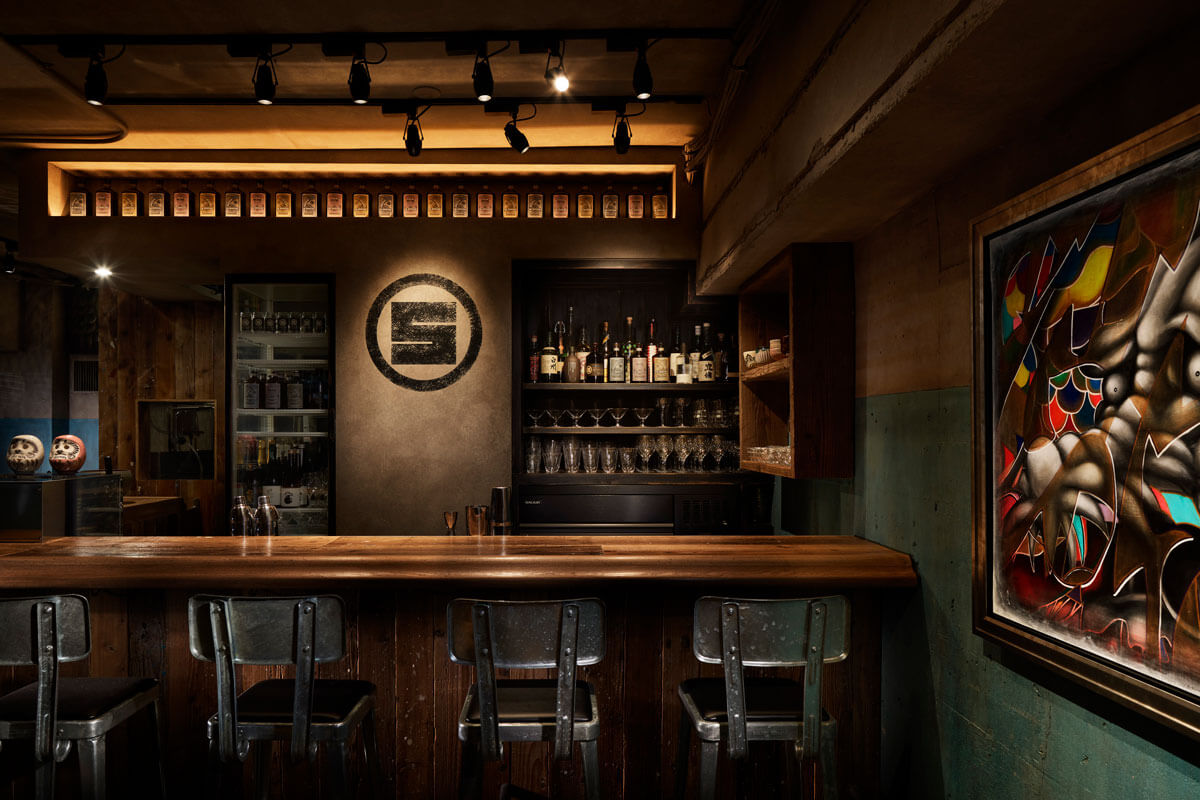 Placing emphasis on both food and drinks, SG LOW is where casual drinks with friends and small gatherings take place. Guests can enjoy drinks ranging from a seemingly endless list of lemon sours to a curated list of classic twists, and highballs featuring The SG Shochu, with a rich variety of Japanese Izakaya food favorites served with an iconic SG style twist. 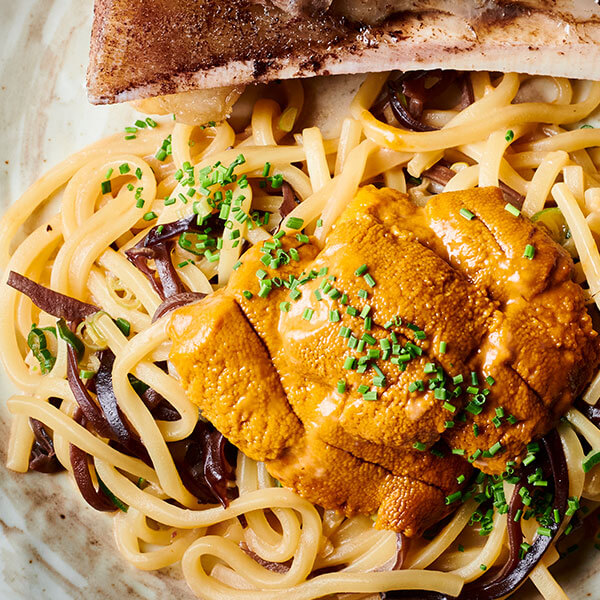 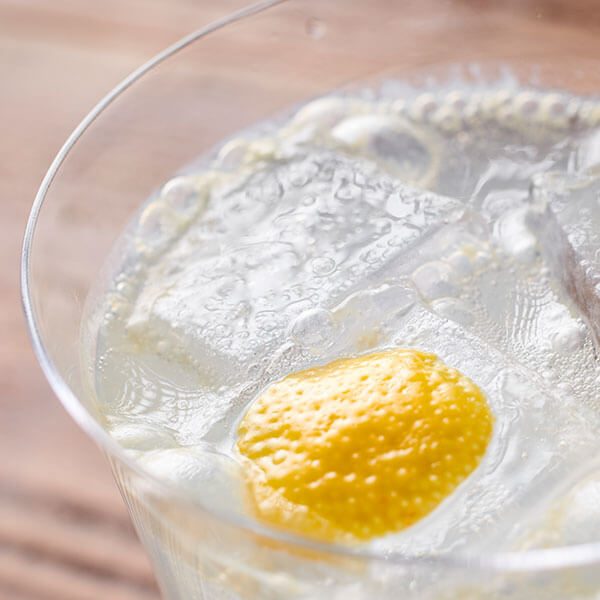 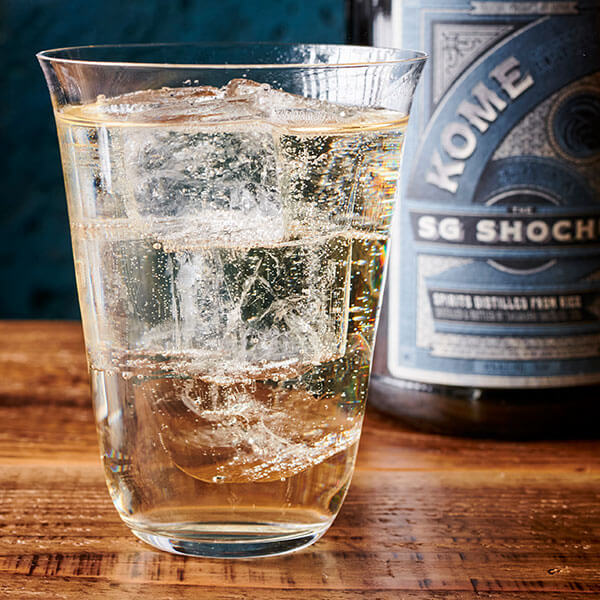 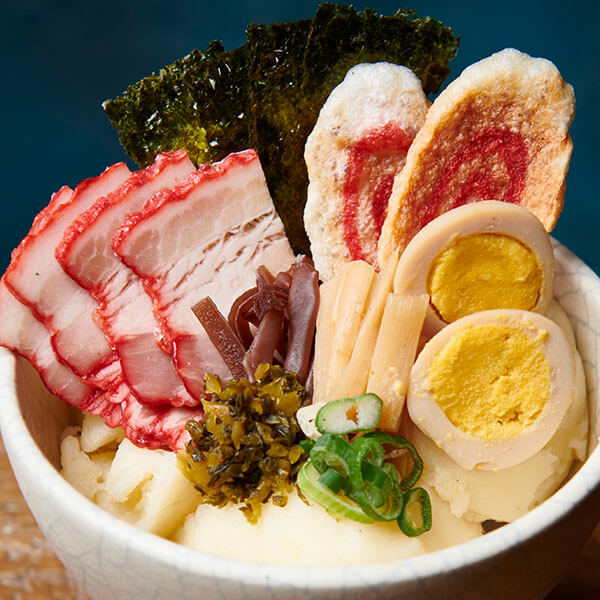